On the Origin of Logic

Last week I wrote on Spinoza’s view of perfection. Today I was planning to look at Schopenhauer’s perspective on the origin perfection. I was therefore searching The World as Will and Representation for the word “perfection”, as one does, and came across a fascinating passage in Volume I (1818), §9.1

In this section, Schopenhauer discusses logic, beginning with a description of its structure. He notes the long chains that can be formed from basic syllogistic rules. He also describes how concepts can be combined into what he calls “spheres,” but they are basically Venn diagrams, which is interesting, since John Venn, whose name such circles now bear, described them in 1880. Schopenhauer credits Gottfried Ploucquet (1716–1790) for first doing it with squares, and Euler (1707–1783) with circles, but Wikipedia also notes that Christian Weise (1642–1708) had done this as well.

Here are examples that Schopenhauer uses in 1818: 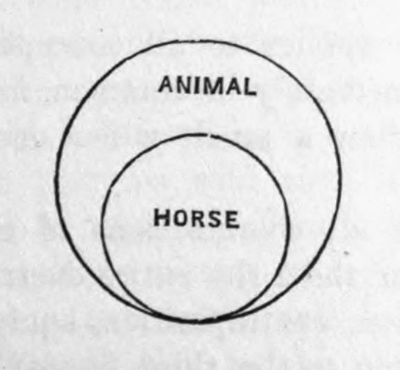 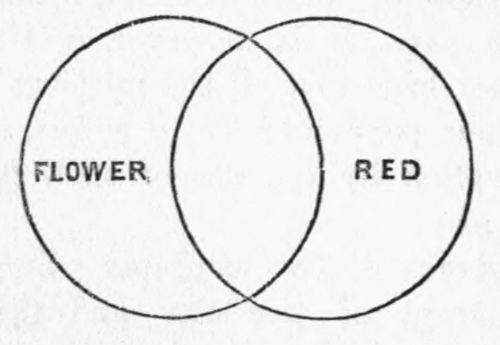 This schematism of concepts, which has been fairly well explained in several textbooks, can be used as the basis of the theory of judgements, as also of the whole syllogistic theory, and in this way the discussion of both becomes very easy and simple. For all the rules of this theory can be seen from it according to their origin, and can be deduced and explained.

Then he seemingly begins to bore himself, and makes an interesting turn:

But it is not necessary to load the memory with these rules, for logic can never be of practical use, but only of theoretical interest for philosophy. For although it might be said that logic is related to rational thinking as thorough-bass is to music, and also as ethics is to virtue, if we take it less precisely, or as aesthetics is to art, it must be borne in mind that no one ever became an artist by studying aesthetics, that a noble character was never formed by a study of ethics, that men composed correctly and beautifully long before Rameau, and that we do not need to be masters of thorough-bass in order to detect discords. Just as little do we need to know logic in order to avoid being deceived by false conclusions.

Logic is only one tool for reasoning. Moreover, theory has little to do with practice. Knowing all about logic in theoretical terms means little or nothing for actual reasoning. This was certainly my experience in the only philosophy course I took in college, “Introductory Logic,” which put me off philosophy for nearly two decades (having before that class thought that I might make it my major).

Schopenhauer thinks that Aesthetics and ethics must have “some use in practice,” though “in a much less degree” than the thorough-bass has for music, and “mainly a negative one.” Of logic, “not even this much can be conceded. It is merely knowing in the abstract what everyone knows in the concrete.”

Not even logicians use logic in their daily lives:

Even the most learned logician lays these rules altogether aside in his actual thinking. […] To seek to make practical use of logic would therefore mean to seek to derive with unspeakable trouble from universal rules what is immediately known to us with the greatest certainty in the particular case. It is just as if a man were to consult mechanics with regard to his movements, or physiology with regard to his digestion; and one who has learnt logic for practical purposes is like a man who should seek to train a beaver to build its lodge.

Logic takes what is embodied and natural and makes it awkward, theoretical, and unnatural. To think one must know the laws of physics in order to walk is as preposterous as training a beaver to build its lodge. This kind of instruction has no practical value. It is a self-contained system that affects nothing outside of itself:

Logic is therefore without practical use; nevertheless it must be retained, because it has philosophical interest as special knowledge of the organization and action of the faculty of reason. It is rightly regarded as an exclusive, self-subsisting, self-contained, finished, and perfectly safe branch of knowledge, to be scientifically treated by itself alone and independently of everything else, and also to be taught at the universities.

However, he argues, logic is needed in the study of how rational and abstract thought works, and therefore it is inherently important for philosophy. I’m skipping that section to get to the next paragraph, where he explains the origin of logic:

However little practical use logic may have, it cannot be denied that it was invented for practical purposes.

The first step towards logic was formally stating which propositions the two parties jointly acknowledged. “These propositions were at first concerned only with the material of the inquiry.” In other words, they were concrete, directly relevant to the current discussion, and agreed on by spoken consensus. But from this point, patterns were noticed in the ways that the debaters returned to the jointly acknowledged truth, and how they attempted deductions:

It was soon observed that, even in the way in which the debaters went back to the jointly acknowledged truth, and sought to deduce their assertions from it, certain forms and laws were followed, about which, although without any previous agreement, there was never any dispute. From this it was seen that these must be the peculiar and essentially natural method of reason itself, the formal way of investigating.

This is important. They noted certain patterns emerged in reasoning, and because nobody argued that these particular forms were themselves invalid, they must themselves be true. The rules of logic were inferred from an apparent lack of evidence against them.

This relates to a much later developments, involving two American philosophers:

You may notice in yourself a tendency to assume that rules of logic are not empirically learned, and that no amount of observation could refute them. Does the italicized phrase sound familiar? If you’ve read my work on Kuhn, then it should: See this tweet and the two that follow it.

Having inferred that there are general laws of reason, someone decided to codify these abstractly. Notice that the appeal is aesthetic: “it would look fine.”3

Now although this was not exposed to doubt and disagreement, some mind, systematic to the point of pedantry, nevertheless hit upon the idea that it would look fine, and would be the completion of methodical dialectic, if this formal part of all debating, this procedure of reason itself always conforming to law, were also expressed in abstract propositions.

A mind “systematic to the point of pedantry”! This phrase captures both how unnatural and how annoying logic is. Keep this phrase in mind, as it reminds me of something Nietzsche will say in the Genealogy of Morality about Socrates.

Here I will refer to the post I wrote on perfection. Spinoza notes that “perfect” originally means complete or finished, which was judged when the creator of an object ceased to work on it — i.e., a local and concrete judgement. It is only through inference from many single instances, performed by an external observer, which shifts the judgement of perfection to an abstract category. This is how the abstract idea of “perfection” comes about.

“Perfect” starts as an adjective which can be observed, but becomes an abstract noun: perfection.

I want to argue that Schopenhauer’s observation about logic is similar. First, the Greek schools attempt persuasion by whatever means necessary,4 by providing relevant evidence which is embedded in an embodied conversation. It is only through many iterations of these conversations, during which people reason with each other, that apparent laws emerge, and “reason” untethers itself from sociality. These are then thought to be the way that a new abstract idea, “reason,” must function.

“Reasoning” starts as a social verb, but becomes an abstract noun: reason.