In the beginning, there was anoxygenic photosynthesis.

OK, not in the beginning beginning, but at least before oxygenic photosynthesis.

First, a refresher. Photosynthesis is a way to convert light energy into chemical energy. Though the term is general, and energy can be captured and stored in different ways, the most modern and familiar form occurs in plants and cyanobacteria.

This is oxygenic photosynthesis, and it is what is typically meant when the term photosynthesis is not qualified. This method captures sunlight and stores it as carbohydrates (for example, sugars). In the process it absorbs (“fixes”) carbon from carbon dioxide, and releases oxygen. Hence oxygenic, as opposed to anoxygenic, which does not release oxygen. The exact details are complicated, but here’s a simplified overview: 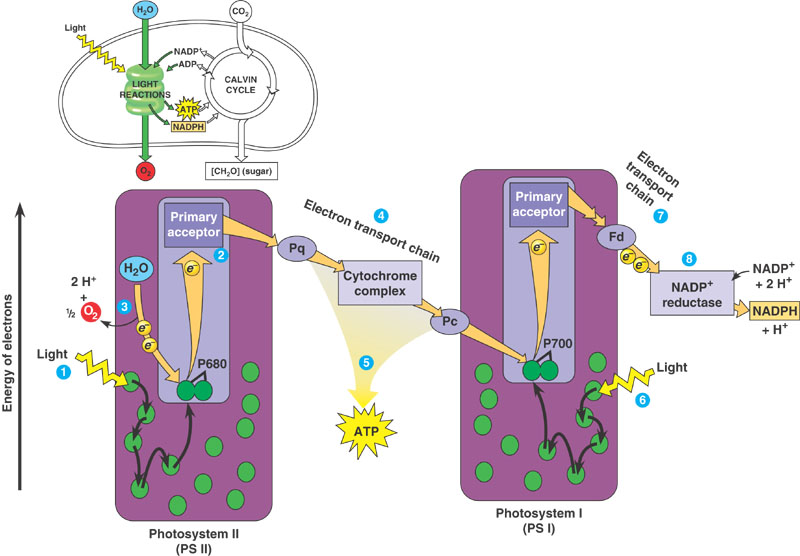 We now enjoy breathing oxygen. But it was not always so.

The early atmosphere had little or no oxygen. Oxygen was produced by photosynthetic organisms, using the above method. This change in the atmosphere, caused by the success of cyanobacteria, is called the Great Oxidation Event. This was explosive and extremely dramatic, and certainly one of the biggest revolutions in Earth’s history. I’ll write more about it later, but for now I want to focus on the conditions leading up to it.

Some still extant Heliobacteria use the first photosystem (PS I). This bacteria has something very like chlorophyll, the pigment used in plant photosynthesis, but which absorbs a part of the light spectrum that penetrates deep water. They are obligate anaerobes which means that they cannot survive in the presence of oxygen. They are also in the strange position of being photosynthetic but heterotrophic. Photosynthetic organisms are typically autotrophic, i.e., they provide their own food (assuming access to sunlight, carbon dioxide, and water). But Heliobacteria cannot fix atmospheric carbon, and so must find environmental pyruvate, acetate, or lactate as their source both of carbon and of electrons (whereas plants get these from carbon dioxide in the air and water, respectively).

Recap: Heliobacteria cannot tolerate air, lives deep underwater, and has diverse ways of getting carbon. (In fact, they can even survive in the dark by fermentation of pyruvate.)

Another kind of bacteria, Chloroflexus, has another kind of photosystem (PS II). Bacteria is colourful. Chloroflexus is green filamentous bacteria, and there are also purple sulphur and non-sulphur bacteria that share this photosystem. The system can use either hydrogen sulphide or hydrogen gas as their electron source. They fix carbon using the Calvin cycle which is also used by plants. They are also extremely versatile: they can grow with sunlight in the absence of oxygen, or heterotrophically if oxygen is present.

Why am I telling you all this? The details aren’t too important. What’s important is that these two earlier methods of photosynthesis depended on stuff in the environment as a source of electrons to use sunlight to store energy (by fixing carbon).

The cyanobacteria are the most important oxygenic photosynthetic

bacteria. They have two photosystems: Photosystem I is related to the RC-1 containing photosynthesis most primitively seen in the heliobacteria, and Photosystem II is related to the RC-2 containing photosynthesis seen most primitively in the green filamentous bacteria. Probably this conjunction of photosystems occurred by gene transfer between distinct Heliobacter and Chloroflexus type organisms. It was a coupling that was to prove enormously successful, transforming the world because it permitted oxygenic photosynthesis.

This leads to the Great Oxidation Event mentioned above. But notice that there are two existing systems that get combined by horizontal gene transfer. The revolution is recombinant, depending on older technologies, and not fully novel.

It worked because the two photosystems acting in concert provide a double hit, boosting the energy level of electrons and thereby providing sufficient oxidising power to split the inexhaustible supply of water to provide a reductant without sacrificing the ability to use photons in the red region of the spectrum. Oxygen is produced as a side-product. The first hit is from Photosystem II and results in noncyclic photophosphorylation, the flow of electrons to Photosystem I with the production of ATP, and the splitting (oxidisation) of water (Figure 1.13). The second hit is from Photosystem I where electrons are excited again, and now they are transported to ultimately produce reducing power in the shape of NADPH. However, when sufficient reducing power is already present Photosystem I can carry out cyclic photophosphorylation to produce ATP.

First, this revolution overcomes an energy barrier, which is the barrier to split water. You need a certain amount of energy to release the energy from water. This is also true much later in human development; you need to be able to heat things to a certain temperature in order to start a Bronze Age or Iron Age, and that depends on agricultural tools. Perhaps more straightforwardly, you need industrial technologies to make use of fossil fuels, and you need fossil fuels to get to nuclear.

Also note that there is inertia, and the process is cyclical; once set in motion, it’s more efficient.

The fact that the water supply is inexhaustible is also important. This is at least 2.4 billion years ago. There was little life on land at this point, so water was not in the environment; water was the environment. What was previously environmental becomes a resource.

Notice that oxygen is a side effect, not just a waste product but a deadly waste product, as we’ll see later. When it accumulates, it first kills off everything. At the same time, it paves the way for eukaryotes. Cellular respiration, a form of metabolism which releases the energy which photosynthesis has stored as carbohydrates (and which requires oxygen, which we use, as do plants) is fifteen times more efficient than anaerobic metabolism. Just as water was the environment, which was changed into a resource, oxygen is a deadly waste product which later becomes a fuel.

Most importantly, notice how photosynthesis is now untethered from environmental ions like hydrogen sulphides. They may have been plentiful, but they were not as plentiful as water. This revolution breaks the bottleneck for storing sunlight efficiently. It acts as an accelerant for the later stages in life.

But first it kills off most obligate anaerobes, i.e., pretty much all life. There are unexpected winners and losers. I’ll write about the Great Oxidation Event next time.

One final point is that the diversity is reduced on one level, but increased on another. Modern photosynthesis is dominant, at least on land. We only have evidence of these other methods from stagnant ponds, alkaline soils, and other places that are inhospitable to the dominant form of life. (Think of surviving groups of human hunter-gatherers; they no longer occupy the most fertile areas, as they did before agriculture in the Fertile Crescent.)

These early organisms were weird. They could live in the dark, fermenting stuff, or by sunlight, looking for random sources of carbon. They could switch between living in the air or not in the air, or using sunlight or other energy sources. The success of this revolution killed diversity when it comes to how to obtain energy. But it provided a new playing field, at a higher level, for a later explosion in the diversity of plants.

In part, it did this by accident, stabilising an out-of-equilibrium situation; the release of oxygen formed the ozone, which protected from the sun’s damaging short-length UV-C radiation. But that’s enough for today.