On the Syntax of Feelings

As a friend of mine is fond of saying, “feeling is first,” after the famous opening of an E. E. Cummings poem from 1926:

since feeling is first
who pays any attention
to the syntax of things
will never wholly kiss you;

This is certainly the case if the question is between feeling and language. Language follows feeling, as anyone who has regretted saying something in the heat of an argument can attest.

More than that, there is a distancing effect to language, perhaps even to concepts per se, even when uninstantiated in words. The poem also has a sense of the problem of self-consciousness, of not being wholly immersed in the experience; some part of the attention is lost in thought. The poem puts phenomenology over philosophy — experience over thought.

But is it “the syntax of things” that distances us from experience?

Everything depends, I think, on what one means by “things.” I’d like to say something in defence of the firstness of syntax, or if not of its primacy, then at least of its simultaneity with feeling.

First, a few words about feelings.

Feelings appear to come “from us.” But do they?

Feelings are occasioned by events, whether physical, mental, or otherwise: a conversation we had or are having, something we read or are reading, or an occurrence that causes us to recollect an emotional memory. Nor need the stimulus be synchronic; the diachronic can be even more deleterious — or even more delightful. A bad night’s sleep, or a month or more of loneliness, can certainly affect one’s affect, make one melancholy, as can a trip abroad, or a long lazy afternoon in the company of a good friend or book.

In other words, there is a cause, a stimulus, for feeling, whether chronic or acute. What kind is not important, for my present purpose, though it is of course often worth investigating after a feeling has faded.

Almost simultaneously, but actually just after such a stimulus, we feel an energetic reaction. If this is what we mean by feeling, and by syntax we mean language, then there can be no doubt that “feeling is first.” The incontestability of this energy is probably what makes feelings feel primary. But this feeling of firmness and of primeness can itself obscure the fact that any energy must be interpreted if it is to be put to any use — or if it is to be dissipated in any other way, utility notwithstanding.

Reasoning occurs ex post facto. Rationalisations which follow feelings can themselves cause feelings, in a vicious, virtuous, or petering-out cycle. But they cannot be a first cause for feelings. In other words, reasons can amplify feelings, they cannot produce them. (Other people’s reasons can naturally act as a potent stimulus.)

Even if the causal reason for a feeling appears crystal clear, and it seems that this reason leads to the feeling, I would argue that, on closer inspection, the feeling was there before any reasoning. Whether the reason appears as a niggling annoyance or an explosion at an injustice, it is the feeling that niggles or explodes — and reason follows. The stimulus produces the energy. The energy precedes the thought, and the thought produces causality, often including an apparent causality for the feeling.

Furthermore, the feeling that accompanies reasoning can further obscure the already obscure ordering. Rationalisations which seem certain are more tempting, and probably more effective. The certitude that follows from a satisfying rationalisation can occasion further reasoning, and thence further feelings of certainty.

Feeling, then, is primary, at least with respect to language.

But are there primary feelings?

Lisa Feldman Barrett has found that an inquiry into basic emotions raises more questions than it answers. More specifically, the harder she looks at emotions across cultures, the less unity they seem to have. If the theory of constructed emotion is right, it would mean that even the most basic emotions must be learned.

In meditation, moreover, I’ve found that a close examination of the physical sensations which underlie feelings make them, if anything, harder to categorize. This seems odd if feelings really are first.

So at the societal level, as well as at the level of individual introspection, feelings, which seem so solid when they loom, fall apart under the slightest scrutiny. When in the sway of strong emotion, introspective scrutiny is, of course, the hardest thing to muster, so I do not wish to diminish the difficulty of this scrutiny, however slight. And for psychology as a discipline, it must also be difficult to interrogate something as obvious as the “basic emotions,” since they seem so self-evident to anyone experiencing them. Nonetheless I do expect the categories to collapse.

Sympathetic resonance. — All stronger moods bring with them a sympathetic resonance on the part of related sensations and moods: they as it were root up the memory. Something in us is provoked to recollection and becomes aware of similar states and their origins. Thus there come to be constructed habitual rapid connections between feelings and thoughts which, if they succeed one another with lightning speed, are in the end no longer experienced as complexes but as unities. It is in this sense that one speaks of the moral feelings, of the religious feelings, as though these were simple unities: in truth, however, they are rivers with a hundred tributaries and sources. Here too, as so often, the unity of the word is no guarantee of the unity of the thing.

If there is no unity to the basic emotions, then how do we know what the feeling is, or means?

It’s my current feeling that feelings must be learned.1 This includes the apparently basic categories of feelings, like sadness or happiness. Learning must come from experience, which is always embodied and never without context, however much we might strive to ignore the body, or to escape its environment.

So what is my working hypothesis of the “syntax of things” when it comes to an individual feeling?

This coding comes from past experience. Most feelings are neutral, and most feelings dissipate here without entering awareness.

In other words, by the time I know that I feel something, it is already positive or negative. Then my mind attaches itself to that positivity or negativity, and subsequently begins generating interpretations. Many or most of these steps may themselves have been learned. They are cultural. My ignorant guess is that most animals, most of the time, do not do 3-6 — and I might not either, had I somehow survived without ever having learned a language.

The process is so fast that the steps can appear simultaneous, but they are not. It is also so fast that the order can appear jumbled, and it is probably adaptive for thoughts to try to jumble the order in order to make themselves more persuasive to me, and by extension, to whomever I’m speaking. It’s easier to argue a point if I myself believe it, or to voice a thought if I think that it is mine.

The feeling is indeed first, before any syntax of language. But it cannot precede the stimulus which produced it, nor can it occur in the absence of context — the current context, of which past experience is itself a context.

The brain changes with every experience, and with it, the “syntax of things,” since there can be, for us, no things in the absence of experience, however abstract or psychological those things or that experience might be.

If by “things,” then, we mean words, thoughts, mental objects, rules, social conventions, and so on, then I do not dispute that “feeling is first.” But if by “things” we mean something more like experience, then syntax is first, at least with respect to the feeling in question. In a phrase like “that’s how things are” or “on the nature of things”, experiential reality might not be a bad reading of the word “things.”

In the beginning, perhaps, “things” were unconditioned.

This unconditioned state may slip away even before the oceanic feeling of infancy slips away, i.e., even before birth, given evidence that children learn language sounds within the womb.

We half-perceive (or half-receive), but also half-predict (or half-project) what is happening “to” “us.” This is always happening in the only moment in which we can perceive the present or predict the future, which is in the present. But our perception of what is present is conditioned by our past.

We learn by induction and by example, and we half-generate and half-inherit a worldview with baked-in obviousnesses. One of the most basic (and therefore “obvious”) is that our feelings or thoughts are “ours” and mean something. This is undoubtedly an adaptive way to be in the world.

But simple experiments can challenge it, even beyond the white bear. Can you produce any thought at will, without reference to your past experience? What about an insight? Can you generate a feeling? If you can, what is its relation to feelings you’ve felt in the past?

(In writing today, I also found that I’ve written on the ephemerality of feelings before.) 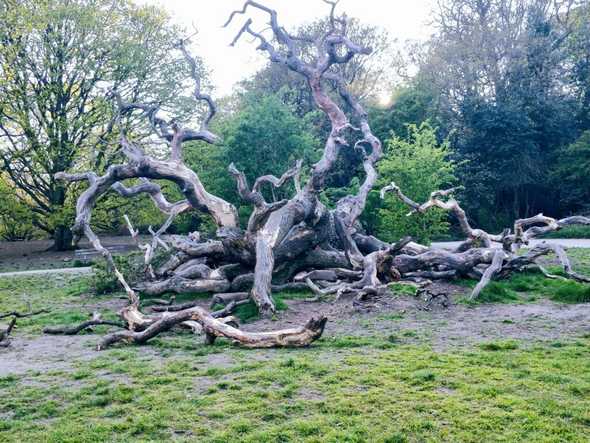