It’s been a month since I wrote about the adoption of a strange and intense note-taking system, so I thought I’d give an update about how it’s going. If you have no idea what I’m on about, please see that original post.

My current process is to take notes on paper, whenever I encounter ideas or they occur to me — reading generates the most notes, followed by conversations and listening to podcasts.

For reading, I paraphrase every idea I encounter in the text. Interestingly, it doesn’t feel that laborious. It takes longer, but it also produces a flow state rather readily. That means I’m more limited by time than I am by concentration. Paraphrasing forces me to realise when I haven’t actually understood the point the author is making.

During conversations, and while listening to podcasts or audiobooks, I also take notes on paper. As you might imagine, this produces a lot of notes. I’ve used whichever notebook was nearby, and in the beginning I was mostly binning notes once they were processed, so I can’t tell you exactly how much it increased my note-taking, but it has been significant.

I then take these paper notes and process (i.e., organise and type) them into a bullet-point list, usually in Zotero. This is equivalent to Luhmann’s literature notes and basically amount to “X says Y in chapter Z.” Probably significantly, I don’t copy the handwritten notes directly, but rather paraphrase and simplify them again.

Finally, I go through that list of bullets, and think through how it is connected to what is already in the Zettelkasten, creating new notes and links in the system as I think. This usually involves a third paraphrase and stripping down of the material. The experience really is more like thinking in writing than it is like writing or transcribing.

Since I am using the excellent Gollum, this can be done in any web browser. At the start, I mainly edited through its interface. Lately, however, I have been editing the Markdown text directly.1

I manually maintain all links, forwards and (often) backwards. This means thinking at each stage how this is connected to another note, and how the other note is connected back. But not infrequently I will write something like “Heidegger [[12/26]] disagrees” and I don’t create a backlink from Heidegger’s note page because it’s not important enough (yet).

It’s also worth saying that I virtually never delete anything, even though the software (via git) would provide a record of any deletions. Instead, when I change my mind or encounter new evidence, I just append a new note to the existing one. In effect this produces a living record of my thinking.

So an average note is 70 words long, with a median of just 18 words. At the moment, the longest note is 367 words.

Why such short notes? Well for one thing, they are meant to be atomic. But quite frequently I make notes that are basically just bulletpoint links to several related thoughts. And I’m creating a note for every writer or thinker I reference — currently numbering 85 people, from Ahrens to Wright, with Chuang-tzu, George Eliot, Von Neumann, and plenty of my friends in between.

Even though Ahrens argues that there neither can nor should be any overview, I disobediently wrote another script to make an SVG image of it using GraphViz. I originally had it generating PNGs but they rapidly got too large. Here’s what the whole system looks like as of this morning: 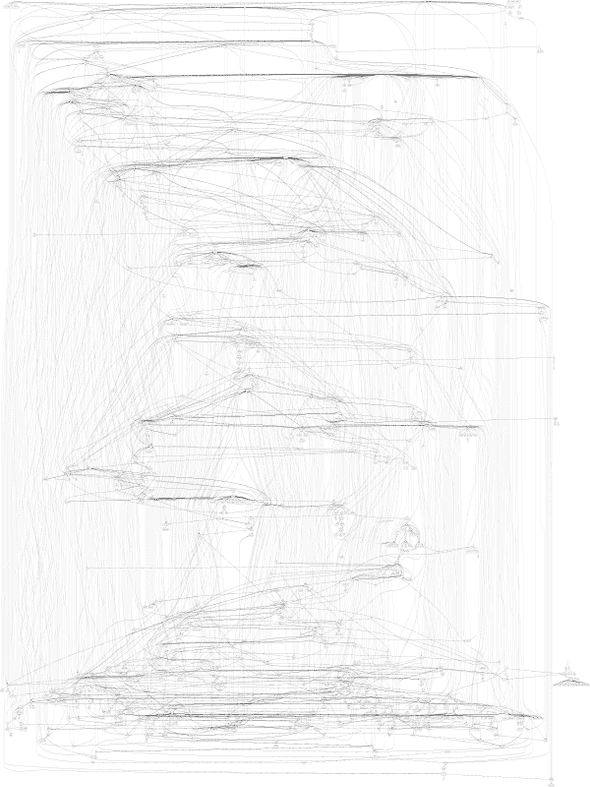 Obviously it only shows the titles, not the contents of the note. Though my titles are not always strictly meaningful, attempting to summarise contents as concisely as possible also seems to be a good exercise.

Here’s a zoom into a random region:

As you may be able to glean from that image, it’s a random mix of people, notes from articles and books I’ve read, and original thinking.

The biggest benefit seems to be that a wider variety of thinking is closer to the surface of my mind at all times. I feel that I think more clearly and can make better analogies. I also feel more confident that I have mastered the material I’ve read (or alternatively, that I know when I haven’t understood, and need to learn more before returning to the material).

A second benefit is the serendipity that Luhmann and Ahrens predict. I often find notes that I’d forgotten about, either by a search or by realising that one note connects to another, then finding more links on that note. This produces novel and insightful connections.

The LessWrong post I read before adopting the system mentioned a concern that it might create biases in the types of ideas it produces. I was slightly worried about that, and recently had a discussion with the writer of that post here. We both agree that there’s a strong impression that this system has improved our thinking, without constraining its content or having structural effects.

I still worry that I may be producing too many “false positives” when it comes to analogies and metaphors. Then again, these analogies can always be revisited or revised. I’ve found that I often come back to individual notes to add arguments and contradictory evidence against previous thinking, in a much more systematic way than I’ve ever done before. This can only be a good thing.

Venkatesh Rao (of Ribbonfarm) raised a more serious concern in this 2016 podcast with Shane Parrish (of Farnam Street). He warns against the seduction of densely interconnecting ideas across domains, because it can create mental models so complex that they obscure reality and discourage reality-testing.

So far, this has not been my experience. I speak more clearly about my ideas, and have a better system for gathering and recording contrary evidence.

I have found that the benefits of using this note-taking system to be immense, so far, and I intend to continue with it.

Have you written anything from this system?

Yes, starting in June 2020. Please see my current writing on ambition and the avant-garde, or on cultural evolution.